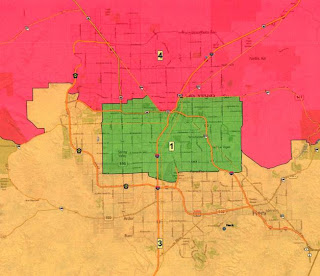 So I played with the numbers last night to get a better sense of the political state of play in redistricting. Now that Judge Russell and his special masters have given us districts, we can get a better sense of who will end up with what. Here are my rough estimates of the partisan makeup of each district after drawing each one as close to reality as possible on Dave's Redistricting App:

So this is what we have so far: one solidly safe Democratic seat, one Democratic leaning seat, one tossup seat, and one Republican leaning seat. As it stands now, Nevada Democrats likely have at least two seats (NV-01 and NV-04) firmly in their pocket while Republicans have a good leg up in one seat (NV-02). NV-03 will probably be the barnburner that both sides will have to fiercely contest again.

Our Other Fave Blogs